Compare prices on car hire in Thessaloniki from all the major brands and find the best deals. When you book through us, unlimited mileage and insurance are always included in the price given. 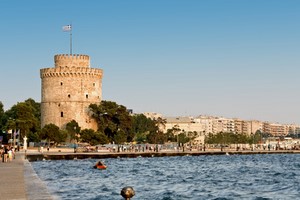 Thessaloniki (Saloniki, Salonica) is located in northern Greece – in the region of Central Macedonia , and is an important port city.It is also the country’s second largest city (363,987 inhabitants in 2006) – and the capital of the administrative district (prefecture) Thessaloniki.

The city has a long and turbulent history – and the historical monuments in the city are very numerous. Here, especially the well-preserved Byzantine churches from the period 300 to 700 ADKr. mentioned. The most famous is the Haghia Sophia Cathedral and St. Demetrius Cathedral (Hagios Dimitrios).   Among the many other historical and architectural attractions include Galerius Arch (apse tou Galérion) from the year 305 ADKr. and – not least – the “White Tower” (seaside setting), which is the symbol of the city of Thessaloniki. The collection of Christian and Byzantine monuments stand today on the UNESCO World Heritage Site.

Thessaloniki also has a number of interesting museums, theaters, galleries and other cultural institutions to show off, and in 1997 the city was named “European Capital of Culture”.

The city is of course also a restaurant and utelivsby, and has several very popular shopping streets, especially around the central Eleftherias Square.Each year, in September, there will be a major international trade fair in Thessaloniki.

The nearest airport is Thessaloniki International Airport “Macedonia”, which is about. 15 km southeast of downtown.