Compare prices on car hire in Zakynthos from all the major brands and find the best deals. When you book through us, unlimited mileage and insurance are always included in the price given. 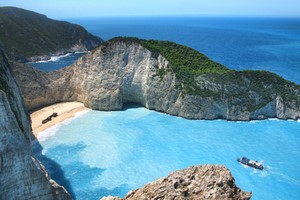 Zakynthos (Zante) is, with an area of 410 km2, the third largest of the Ionian Islands, located off the west coast of Greece .The island has a total population of 41,472 (2005). The capital, Zakynthos Town, lies partly on a peninsula on the east coast of the island and has ca.11.000 inhabitants. It is also administrative center for the district (prefecture) Zakynthos.

Among the sights in Zakynthos town to the beautiful and bustling waterfront promenade (Strada Marina) is mentioned. And on a hill right by the center is an old Venetian citadel. Otherwise it is not so much older architecture in the city, due to a powerful earthquake in 1953 caused severe damage.

Other attractions on the island must be especially “The blue caves” (Galazia Spilea) at Cape Skinari, ca. 30 km north west of Zakynthos town, is mentioned. Next to the caves is also the village Volimes, which is particularly known for its beautiful, picturesque buildings – and the richly decorated church of Agia Paraskevi.

The most popular holiday region of Zakynthos is situated in Alykes, mid north coast. Here we also find the island’s finest beaches.