Compare prices on car hire in Bangalore from all the major brands and find the best deals. When you book through us, unlimited mileage and insurance are always included in the price given. 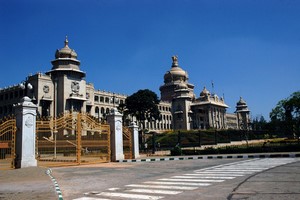 Bangalore is the capital of Karnataka state and is centrally located in the southern part of India .The city is located almost 1000 meters above sea level, providing a comfortable climate. Bangalore was founded and grew up around a fort in 1537, but the place has been mentioned in sources from before AD 900 The population within city limits is estimated at over 5 000 000 (2009), but the number rises to about 6 million if you include the suburbs (2006).

Bangalore is a very beautiful and rich city of wide streets and a rich variety of entertainment such as theaters and nightlife. There are many temples in the city, including the Bull Temple that resembles a bull and the huge temple of the god Shiva. Lumbini Gardens is a park with fun amenities such as wave pool, and Wonder La Amusement Park is the largest and newest theme park with attractions both on land and at sea.

Bangalore International Airport opened in 2008 and is located approx. 45 km from the city.