Compare prices on car hire in Mumbai from all the major brands and find the best deals. When you book through us, unlimited mileage and insurance are always included in the price given. 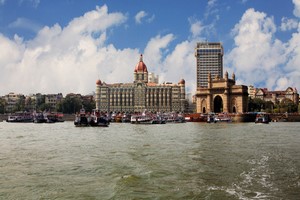 Mumbai is the largest city in India and is located on the west coast of the country bordering the Arabian Sea.Previously called the city of Bombay, but was changed to Mumbai in 1995. This is the most populous city in the country and has a population of over 12 000 000 (2009) within the city limits, while the metropolitan area is measured at over 16 000 000 The city is overcrowded and the building of the New Mumbai started to relieve Mumbai.

Mumbai is known for Bollywood which is the largest film producer in the world. In connection with Bollywood holds the city Mumbai International Film Festival as well as the Filmfare Awards. For art lovers there is a wide variety of galleries in Mumbai, including the Piramal Art Gallery and Jehangir Art Gallery. About 10 km outside the center are several Hindu and Buddhist caves with sculptures called Elephanta Caves. The largest cave is listed as a UNESCO World Heritage list.

Chhatrapati Shivaji International Airport is the largest airport in India and is about. 15 km outside the city center.