Compare prices on car hire in New Delhi from all the major brands and find the best deals. When you book through us, unlimited mileage and insurance are always included in the price given. 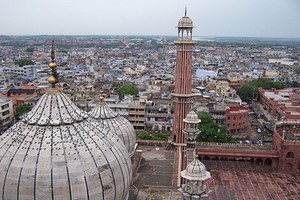 New Delhi is the capital of India and has a population of over 300 000 (2007).New Delhi is located southwest of the city of Old Delhi and both located in the metropolitan area of ??Delhi which has a population of almost 11 000 000 (2007). The city is centrally located in the northern part of India and was built between 1912 and 1929. In 1931, New Delhi officially the capital and took over the status of Calcutta.

New Delhi is a relatively new city, but is built on the ruins of historic cities. Historic sites in New Delhi include Jantar Mantar, built in the 1700s as an astronomical observation space with various astronomical instruments. Lysfestivalen Diwali is one of many religious festivals held in New Delhi, in addition to other festivals that draw Festival Kite Flying Festival and Spring Festival Vasant Panchami.

Indira Gandhi International Airport is approx. 15 km outside New Delhi and is the busiest airport in South Asia with 23 million passengers in 2007.