Compare prices on car hire in Belfast from all the major brands and find the best deals. When you book through us, unlimited mileage and insurance are always included in the price given. 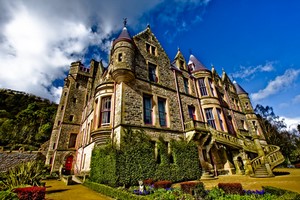 Belfast is located in the northeastern part of Northern Ireland , at the mouth of the Lagan River.Belfast is the capital of Northern Ireland, and the country’s largest city. 375,000 inhabitants live in the city which lies on the Irish Sea and is surrounded by mountains like Black Mountain, Cavehill and Castlereagh Hills. The city is Ireland’s best port.

Belfast Port is one of the world’s largest dry docks at Harland and Wolff shipyard, which is also known for having produced the ship Titanic. Two cranes, Samson and Goliath are also familiar sights. City That means stuffing the mouth was established in 1177 Today Belfast is a result of the industrial revolution, and not surprisingly, linen-industry central to this day. Victorian and Edwardian buildings that Queen’s University from 1849 and Ulster Bank from 1860 is among the city’s sights. Northern Ireland’s parliament is located in the Stormont. This is also the Waterfront concert hall and the Odyssey Center.

There are two airports in Belfast George Belfast City Airport and Belfast International.