Compare prices on car hire in Derry from all the major brands and find the best deals. When you book through us, unlimited mileage and insurance are always included in the price given. 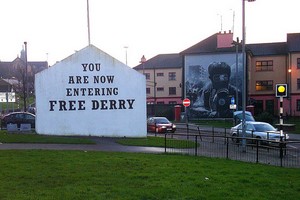 Derry is a city located on the Foyle River near the top of Lough Foyle. Derry limits of Ireland , situated north of Limerick .The city is the second largest city in Northern Ireland, and the fourth largest city in the archipelago. Derry or Londonderry is located in a mountainous area and has approx.   237,000 inhabitants of the suburbs. In the center is home to approx. 100,000 inhabitants.

Derry is renowned for its architecture, and St. Columba Church, Long Tower from the 1700s are worth a visit. Derry also offers interesting museums such as the Harbour Museum and Amelia Earheart Centre. In November, taking over 40,000 to the streets to celebrate the country’s largest street carnival. The city offers many festivals, from Northern Ireland’s largest film festival in November, the international jazz festival in May. Derry is also a good base for shopping and pubturer.

City of Derr Airport is located just outside the center of the city of Derry.