Compare prices on car hire in Galway from all the major brands and find the best deals. When you book through us, unlimited mileage and insurance are always included in the price given. 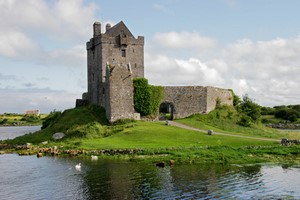 Galway is a city on Ireland’s west coast in Galway Bay. The city is Ireland’s fourth largest, is   near the mouth of the Corrib River.The city has about 66,000 inhabitants.

The town was established in the 1400s by King Richard the second, and was long the seat of Ireland’s trade with Spain and France. Spanish trade is still visible in the architecture. St. Nicholas Church from 1320 is an example of this, and the country’s oldest medieval church still in use. Even Este Christopher Columbus should also have visited Galway, before he embarked on a trip to Iceland or the Faroe Islands. The city has a compact downtown with many pubs. In summer you can experience Galway’s Arts Festival is known for Macnas parade. The city also Galwart City Museum that shows the   history.Galway has a mild, humid and temperate climate with average temperatures in January to 8.6 degrees and 16 degrees in July.

Galway Airport is located six miles east of the city at Carnmore.