Compare prices on car hire in Jerusalem from all the major brands and find the best deals. When you book through us, unlimited mileage and insurance are always included in the price given. 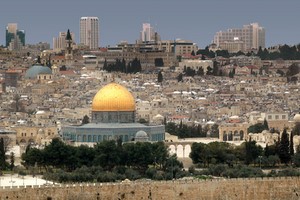 Jerusalem is a city located at an altitude between 550 and 850 meters above sea level. The city is located between the Israeli coast and the Jordan reduction. Jerusalem is Israel’s unofficial capital, and has about.710,000 inhabitants. Jerusalem also includes an annexed part, located in the West Bank in Palestine.

Jerusalem is rich in history and is known to be the center for three of the world’s largest religions: Judaism, Islam and Christianity. It is a mecca for history and culture enthusiasts. The old town dating from before 4000 BC Kr. Surrounded by a 12 meter high wall. Within the wall is well-known monuments as the Dome of the Rock from the 691, which was built by an Arab conquest. Other famous sites include the Western Wall, Temple Mount, and al-Aksa Mosque. Holy Anna’s church from the Crusader is in the far east to the wall. Jerusalem has several museums, a Holocaust Museum, a museum with archaeological collections, where the famous Dead Sea Scrolls are on display.