Compare prices on car hire in Trieste from all the major brands and find the best deals. When you book through us, unlimited mileage and insurance are always included in the price given. 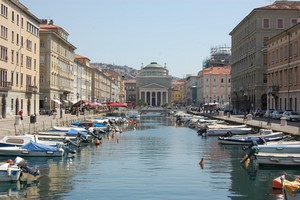 Trieste is a seaport city located in Northeastern Italy. It lies between Slovenia and the Adriatic Sea, together with Croatia which is 19 miles (30km) to the south. The population of this city is said to currently be at about 410,000. Also, it can be concluded that the city’s culture has been greatly influenced because of its geography. This is a result of Trieste being located at the crossroads of Latin, Germanic, and Slavic cultures.

The climate condition in the city is quite good with the temperature going as low as 5.7 °C, while the average high is 24.1 °C. Trieste typically experiences its low temperature in January, with June experiencing the average high. In addition to that, Trieste is known to have a unique culture and you will also enjoy the food. Additionally, the people of Trieste are friendly and you will not have issues fitting in.

When it comes to language, the people of Trieste speak Triestine or Triestino as it is called in Italian. Notwithstanding, a large number of the population in the city speaks the official Italian language. In addition to that, because of the Slovenian influence, you will also find in some areas, some people that speak and understand Slovene. In terms of culture, Trieste is known to still uphold the ancient tradition of the old Austro-Hungarian empire.

The city is a good destination for a vacation as you will find different historic monuments from the Austro-Hungarian period. In addition to this, you will find natural and man-made structures that are sure to make your time in the city memorable. You can take a trip to the Trieste Harbour or the Canale Grande. Additionally, there are other spots you can visit when you are in the city like the Castle of Saint Guisto, Grotta Gigante, Miramare Castle and so on.

There are so many options of places you can choose to visit in Trieste most especially when you have a rental car. You can easily take a 36-minute drive from the Trieste Airport through Aquileia to the famous Piazza Unita Italia, which is 36 km (22.9 miles). At the Piazza Unita Italia, you will get to enjoy several monuments and statues, and you will see many prestigious buildings that are perfect for sightseeing.

Another interesting place you can visit is the Trieste Roman Theatre which is a monumental relic that is located in Via del Teatro Romano. Impressively, the theatre is very close to the Piazza Unita Italia. The drive from the Piazza is estimated at 450 meters (0.3 miles) and with a rental car, the drive is estimated at 2 mins. As a result, you can visit the theatre with ease after your visit to the Piazza Unita Italia.

If you are looking to learn more about Trieste’s rich naval history, it is recommended you visit the Museo del Mare. With your rental car, the drive from the Airport to Museo Del Mare is estimated at 31 min with the estimated distance at 34.4 km (21.3 miles).

Although there is only one Airport in Trieste and it is called the Trieste Airport. The airport is connected to a wide range of destinations across Europe. In addition to this, some of the highly popular flights from the airport, are routes to Munich, Milan, Venezia, and Rome.

Trieste Airport has one of the best facilities across Italy and it is easy even for a first-timer to navigate through the airport. As a result, you will not have to spend a lot of time getting things done. That way, you will save time for other interesting activities.

Also, to make it easier, there are several car rental companies you can choose to use at the airport. Depending on your choice, you can select from any of the available rental services. The available car hire services include Hertz, Thrifty, Europcar, Sicily by Car, Budget Autonoleggio, and so on.

The road conditions in Trieste is impressive as you will have no issue when you drive through the beautiful streets. In most cases, the rush hour usually occurs in the early hours of the morning between 7 am and 8 am. It is best to avoid the roads in the morning if you are just visiting for tourism and sightseeing.

In general, the official speed limit on all the main suburban roads is set to 110 Km/h (68 mph). If you are traveling within towns the speed limit is 50 Kmph (31 mph), for open roads the limit is 90 Kmph (56 mph). And, if you find yourself on the Autostrada, the limit is set to 130 Kmph (81mph). Additionally, you can make use of the various parking options available in Trieste. This includes parking lots, garages, and public parking spaces.