Compare prices on car hire in Hiroshima from all the major brands and find the best deals. When you book through us, unlimited mileage and insurance are always included in the price given. 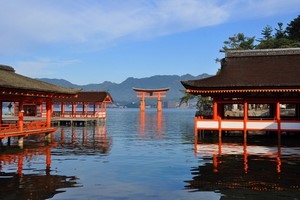 Hiroshima is located on the island of Honshu, at Otaelven. Approx. 1.1 million inhabitants live in the city center, with the suburbs is the population of 1.6 million. Hiroshima is one of Japan’s largest port cities.Over 2,000 bridges crossing the six channels that divides the city.

Hiroshima is most famous for being the place where the U.S. dropped the world’s first atomic bomb during World War II.6. August 1945 was 80,000 killed and 60,000 injured by the city’s population of 250,000 when the bomb detonated 600 meters above the ground. Since the city was rebuilt. Hiroshima has a peace center, the Peace Memorial Park and Peace Memorial Museum, which displays   Atomic Bomb effects and how the city looked after the explosion.Atom dome is the only one left standing after the blast, and is now a memorial in the park. Other attractions include the castle, Hiroshima, which is a reconstructed version of the original from 1590. There is also a park with cherry wood and 350 sakura trees. First weekend in May hosts the city flower festival of jazz music. Hiroshima also has art museum.