Compare prices on car hire in Kobe from all the major brands and find the best deals. When you book through us, unlimited mileage and insurance are always included in the price given. 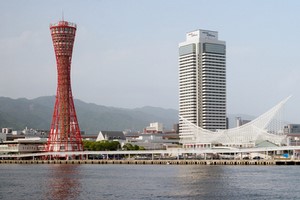 Kobe is a city 30 kilometers west of Osaka, on the island of Honshu. Kobe is the Osakabukta. The city is the capital of Hyogo preach the score, and is part of the metropolitan region of Hanshin. Approx. 1.5 million lives in Kobe, one of Japan’s most important port cities.Kobe has a bridge connection with the island of Awaji.

Kobe was one of the first Japanese cities began to trade with the West in 1868. Kobe is therefore not surprising several houses in the western style. In 1995, Kobe severely hit by an earthquake that measured 7.3 on the Richter scale. Nunobiki waterfalls, one of Japan’s largest, located in Kobe. Visitors can take a cable car to Mount Rokko, where there is a park and great views of Osaka Bay. Kobe has several parks and flower farms. The city also has attractions such as the Hyogo Museum of Art, breweries and sake production.   Kobe organizes fashion shows in late August / early September, and jazz festival in October.

Kobe Airport is located 7 miles from downtown Kobe, and Kansai 24 kilometers from Kobe.