Compare prices on car hire in Osaka from all the major brands and find the best deals. When you book through us, unlimited mileage and insurance are always included in the price given. 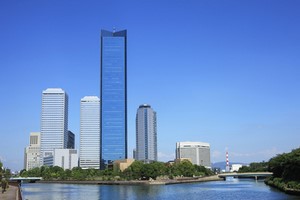 Osaka is located on the southern coast of Honshu on Osaka Bay. Osaka is Japan’s second largest city and center in the metropolitan region of Hanshin.In Osaka is home to approx. 2.6 million inhabitants (2005). Osaka has a number of port facilities, and is intersected by rivers and canals.

Osaka was trading at 600-700’s, and was in the Middle Ages known as Naniwa. The town’s castle was built in 1853 by Hideyoshi, and a museum today. In Osaka there are many Buddhist and shintotempler. It has a reputation for having Japan’s best food, drink and party venue. From Umeda Sky Building, visitors can get a good view of Osaka in the observatory which is located 173 meters above the ground. Osaka has one of the world’s largest aquariums, Kaiyukan. Osaka also has attractions such as Sumoturnering in mid-March and a science museum with planetarium.

Kansai International Airport is 50 kilometers outside of Osaka. It was the world’s first international airport outside the mainland, and is located on an artificial island in Osaka Bay south of Osaka.