Compare prices on car hire in Amman from all the major brands and find the best deals. When you book through us, unlimited mileage and insurance are always included in the price given. 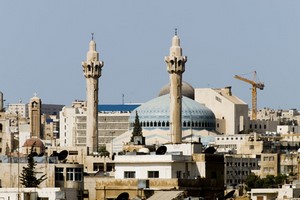 Amman is the capital of Jordan , and has approx. 2.1 million inhabitants (2008).The city is situated where the ancient Philadelphia was.

A number of ruins from the city’s earliest history is preserved – including a Roman amphitheater from around the year 170 ADNOK On Citadel Hill (Jabal al-Qal’a) are also the ruins of a temple of Hercules (also from Roman times), and the Jordan Archaeological Museum, where the findings from a series of archaeological excavations (including Jericho) is collected. Beyond that, there are many beautiful old buildings and historical sites in Amman.

The city also has a variety of museums – including a folklore museum and a car museum. Several of the mosques are also popular tourist destinations. The latest and greatest of these is the impressive King Abduallah In Mosque, with space for 3,000 people. It was built in the 1980s.

Amman is also a shopping paradise. You can do good and exciting purchases in the old Arab bazaar district Souk Jara – or you can visit one of the many modern shopping malls.

There are many other tourist attractions near Amman. The northern end of the salty Dead Sea is located about 40 km southwest of the city. Many travel here because of the alleged beneficial health effects that salt water. In this area there are also several places with particular reference to the biblical narratives. In the Jordan River, which flows into the Dead Sea, is for example the Al-Maghtas – the place where John the Baptist to be baptized Jesus. And between Amman and the Dead Sea is Mount Nebo (817 m), where Moses died after having looked into the “promised land”.