Compare prices on car hire in Nairobi from all the major brands and find the best deals. When you book through us, unlimited mileage and insurance are always included in the price given. 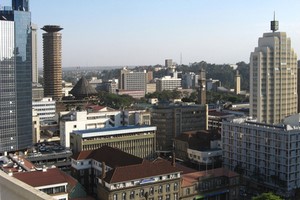 Nairobi has a central location in the country’s southern part. The town is Kenya’s capital and largest city in the country with a population of over 2.7 million (2007).This makes Nairobi to the most populous city in East Africa and the world’s 13th most populated city. Nairobi is located only 145 km south of the equator, but are about. 1600 meters above sea level, providing a comfortable climate.

Many of the safaris that can be found in the area begins and ends in Nairobi, some of which are gorillasafarien Gorilla & Game Park Safari, and a trip to Nairobi National Park. Only 15 minutes away from the big city you can see exotic animals such as lions and leopards up close. 5 km outside the city center Giraffe Centre where visitors can feed the giraffes. In Nairobi, there are many museums, including the National Museum of Kenya and the Nairobi Railway Museum.

Jomo Kenyatta International Airport is the 6th busiest airport in Africa and is located about 15 km outside the city.