Compare prices on car hire in Beirut from all the major brands and find the best deals. When you book through us, unlimited mileage and insurance are always included in the price given. 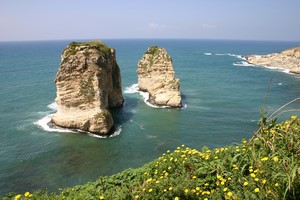 Beirut is centrally located on the west coast of Lebanon is situated on a peninsula that juts into the Mediterranean Sea.Beirut is the capital of the country and has one of the best natural harbors along the Mediterranean’s eastern coast. The city is also the country’s largest with a population of nearly 2 000 000 (2007). The first time the place is mentioned in Egyptian sources from the 1400-century BC Kr and was an important trading port in Roman times.

Beirut offers everything from history and museums to beaches and festivals. Some of the museums located in the city is Beirut National Museum which is dedicated to Beirut’s history, as well as Nicolas Ibrahim Sursock Museum dealing with Lebanese artists. It held many festivities in the city, including the One Big Sunday is a beach party. Beirut Balloon is a hot air balloon where you can book tours to see the city from above.

Beirut Rafic Hariri International Airport is named after Beirut’s prime minister who was assassinated in 2005 and is located approx. 10 km from downtown.