Compare prices on car hire in Kaunas from all the major brands and find the best deals. When you book through us, unlimited mileage and insurance are always included in the price given. 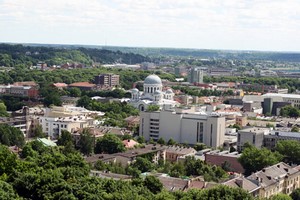 Kaunas is located southwest of Lithuania at the confluence of the rivers Nemunas and Neris. Kaunas is Lithuania’s second city with its 376,000 inhabitants.

Kaunas was founded in the 1000’s and was the commercial heart of the Middle Ages. The old town has many narrow streets and the churches. Here lies the town hall in the Renaissance style from 1542, also called the white swan, and the ruins of a castle, which was destroyed by the Teutonic Order in 1317 The city’s oldest building is the castle Kauna. Kauna also a Bernardin Monastery and Archaeological Museum. In   the city’s main street is the two-mile Frihetsavenyen.Visitors can also go on Panemunes Park beach by the river, ride horses, play tennis or golf. At the end of April held Kaunas Jazz Festival, which is known internationally. In October, the dance festival, bike show in June and the summer, the operettas of the castle, in late June or July.

Kaunas International Airport is located 14 miles north of the town of Lava Frame.