Compare prices on car hire in Skopje from all the major brands and find the best deals. When you book through us, unlimited mileage and insurance are always included in the price given. 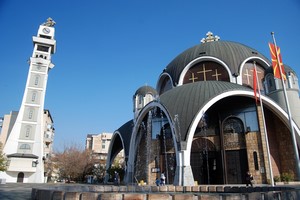 Skopje is the capital of Republic of Macedonia , and is in Povardarie region.The city lies on both sides of the river Vardar, and has 470,000 inhabitants (2003).

The city was founded by illyrne, and conquered by the Romans in the fourth century, has also been under Serbian rule and belonged to the Ottoman Empire. In 1963 the city was hit by an earthquake that hit most of the city. Kurshumli An is one of three hotels that still remains from the Middle Ages.

On the highest hill of Skopje’s Kale-fortress, built by the Byzantine Emperor Justinian in the 1000’s. There are beautiful views over the city. The city has several churches and mosques. Sultan Murat mosque is the largest Balkans. Bit Pazaar is the largest food market in Skopje. The city keeps Skopje Summer Festival each year, and the Skopje Jazz Festival in October.

The airport, Skopje Aleksandar Makedonski International , named after Alexander the Great, is located 20 miles outside the city.