Compare prices on car hire in Tetovo from all the major brands and find the best deals. When you book through us, unlimited mileage and insurance are always included in the price given. 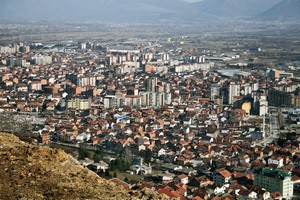 Tetovo is located in the northwestern part of Macedonia , in the shadow of the Sar Mountains.Around 60,000 live in Tetovo.

The city was founded in the 1400s, as a small medieval Orthodox settlements around Sveta Bogordica church. The town grew up around the church. In the 1400-century, Tetovo during the Ottoman Empire, and the city’s Muslim population increased. It also did Tetovo number of mosques, baths and markets. The city was also an important commercial center for traders and local farmers, as well as an important fortress. Then came the Turks and gave the city the name Lime proportion. In 1912 during the Balkan wars, the city was Serbian. Among the sights is the decorated mosque in konstantinopelsk style from 1459 at the Pena River. From Bal-Tepe fortress there are panoramic views of Tetovo and the surrounding area. The city also has an art museum in a Turkish hammam.   Tetovo is located near the ski resort of Popova Sapka.

Skopje Airport is 65 km away and takes ca.en hour to run.