Compare prices on car hire in Merida from all the major brands and find the best deals. When you book through us, unlimited mileage and insurance are always included in the price given. 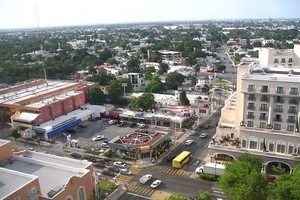 Merida was founded in 1542 in areas where the Maya city earlier T’ho lay. Mayan centers of Chichén Itzá and Uxmal is located nearby. Chichen Itza is an archaeological ruinby built by the Maya civilization, in northern Yucatan. In 2007 the main building, the Castillo or Pyramid of Kukulcan voted as one of the world’s seven wonders. The area is on the UNESCO list of World Heritage sites. The ruins were found in the 1800s and several temples have been restored. There are traces of the Mayan era 600-900 ADKr. here. Merida also has Mayan museum with valuable collections. The city’s Cathedral from 1500-century ether also worth a visit.

Manuel Crescencio Rejón International Airport is five kilometers from the center of Merida.