Compare prices on car hire in Agadir from all the major brands and find the best deals. When you book through us, unlimited mileage and insurance are always included in the price given. 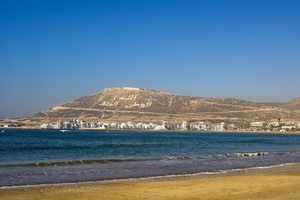 Agadir is located southwest of Marrakech in southern Morocco on the Atlantic.Agadir is located about ten kilometers north of Wadi Sous estuary. The port city with its 636,000 inhabitants is surrounded by the Atlas Mountains and Sahara Desert.

Agadir was founded ca.1500 by the Portuguese, who built the fort of Santa Cruz de Cap de Gué here in 1503. Berbers chased the Portuguese in 1541, and in 1913 founded the French a port of Agadir. Large parts of the city was hit by an earthquake in 1960, but is now rebuilt. The biggest attraction in Agadir’s beach, which is no wind and plenty of people. The ruins of a fortress, is one of the hills around the city. One of the attractions of the city’s zoo, Vallee des Oiseau, who has birds from around the world and goats from the Atlas to name a few species. Agadir also has several golf courses around town.

Agadir Al Massira airport is five kilometers outside the center.