Compare prices on car hire in Casablanca from all the major brands and find the best deals. When you book through us, unlimited mileage and insurance are always included in the price given. 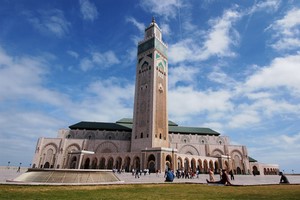 Casablanca is located in western Morocco on the Atlantic.The port is one of the most important, here are exported most of its products. Casablanca is also the country’s railway hub.

Casablanca is perhaps best known for the American film classic Casablanca with Humphrey Bogart and Ingrid Bergman, where the action is set to the city.The city that does mean the White House, is rich in culture and architecture. Here is Moorish and Art Deco buildings, and everything from mosques to Turkish baths. King Hassan II Mosque, the third largest mosque in the world. The 210 meter-high minaret is the tallest in the world. It is also one of two mosques in Morocco open to non Muslims. It was completed in 1989. The city has a stable climate.