Compare prices on car hire in Tilburg from all the major brands and find the best deals. When you book through us, unlimited mileage and insurance are always included in the price given. 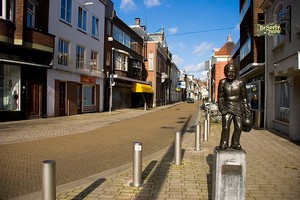 Tilburg is the Netherlands’ sixth largest city with its 287,000 inhabitants. Tillburg located in the province of North Brabant, about 30 miles north of Eindhoven and seven kilometers from the border with Belgium .

Tilburg’s history goes back to year 709 when the city was mentioned for the first time. In the Middle Ages, Tilburg a collection of hamlets around a small castle. In the 1400-century-in Jan van Haestrecht Tilburg Tilburg castle, which later became the factory in the area. Tilburg has been an important industrial center with an emphasis on ullindustri. The farmers made their living by selling wool, and learned to weave. In 1881 there were 145 spinning mills here. Today there are few left. The work process can be considered in Audax Textilmuseum, where the wool produced still. In a former wool factory is Contemporary Art Museum De Pont. Tilburg hold festivals such as Festival Mundial, world culture, jazz festivals and pop music festival Burn Road Festival.

Eindhoven Airport is 31 kilometers from the center of Tilburg.