Compare prices on car hire in Auckland from all the major brands and find the best deals. When you book through us, unlimited mileage and insurance are always included in the price given. 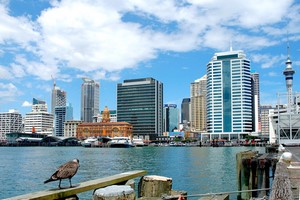 Auckland is New Zealand’s largest city with about one million inhabitants.The port city is located on the northern part of North Island. 375,000 live in the center of the city which lies between the Waitemata Harbour and Manukau Harbour.

Auckland is one of the world’s largest sailing cities, and is known as the City of Sails, precisely because of the many sailboats that live here. From Sky Tower, the tallest freestanding tower in the southern hemisphere with its 328 meters, has a good view over the city and harbor. Auckland also has the largest concentration of native Maorier in New Zealand and the Auckland Museum, visitors can learn more about maorisk culture and traditions.The city has other attractions such as the Auckland Zoo, where such can see the kiwi bird, and Waitakere beaches north of Auckland, to name a few. Visitors can also take em boat trip to the volcanic island Rangioto.

Auckland International Airport is located in the southern district of Mangere approx. 18 km outside the city center.