Compare prices on car hire in Halden from all the major brands and find the best deals. When you book through us, unlimited mileage and insurance are always included in the price given. 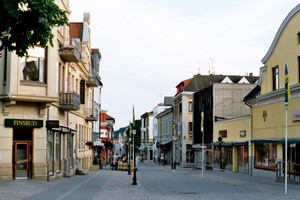 Halden, which has approx. 28,800 inhabitants (2009), located at Iddefjorden south in Østfold county – near the border with Sweden .Boundary The dividing line between the two neighboring countries runs along the middle of Iddefjorden, continued through Svinesund the Outer Oslofjord. The nearest neighboring cities Sarpsborg (31 km north of Halden and Strömstad in Sweden (32 km south of Halden).

Halden was byprivilegier under its old name – Fredrikshald – in 1665, and the town had grown up below the upland fortress, which was founded 20 years earlier. Fortress Fortress is Halden’s most famous attraction. In connection with Norway in 1658 had to cede Bohuslen to Sweden, the castle was extended and enhanced – and it appeared then that’s most important defenses against the Swedes. The resort is very well preserved.

Much of the Halden was destroyed during a fire in 1826, and it was then listed a number of stately buildings in the Empire style. One of these is Fredrikshalds Theatre (1838) – the oldest theater building. It had however been a theater company in Halden, even before this. In conservative (“Harald Fairhair Club”), built around 1760, is in fact Rosenlund Hall – the country’s oldest theater.

An architectural attraction just outside the city’s Red Mansion – families Tanks and Anker’s old residence. The oldest parts of this building complex is from the 1600s, while the rest are listed in the late 1700’s.