Compare prices on car hire in Cebu from all the major brands and find the best deals. When you book through us, unlimited mileage and insurance are always included in the price given. 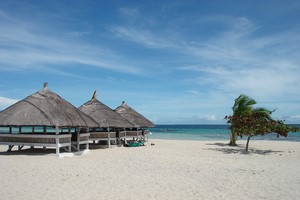 Cebu is the capital of the province of Cebu and is nestled on the east coast of the island of the same name. The port of Cebu is the Philippines second most important port after Manila and exported goods such as fish and timber. Cebu was founded in 1565 by the Spaniards and was the first Spanish settlement in the Philippines. Today the population measured at 815,000 (2007).

Since Cebu is the oldest city in the Philippines, there are a lot of history to experience. In 1521 came the explorer Ferdinand Magellan to Cebu and it is said that he left a cross that can now be seen in a chapel in the street Magallanes Street. Fort San Pedro is another historical attraction, and was built in the 1500s, in addition to the cathedral and the basilica in the city. Taoist Temple is a beautiful Chinese temple that was built in 1972. There are nearly 100 steps to the temple and from there it is a fantastic view.

Mactan-Cebu International Airport is located on the island of Mactan and 10 km from Cebu.