Compare prices on car hire in Bydgoszcz from all the major brands and find the best deals. When you book through us, unlimited mileage and insurance are always included in the price given. 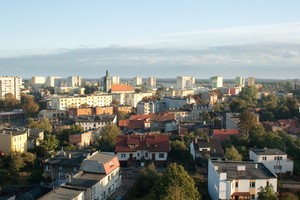 Bydgoszcz is located south of Gdansk and the north of Warsaw .The city is Poland’s eighth largest city with 374,000 inhabitants. Bydgoszcz is ten kilometers west of the River Vistula. From here the channel to Notec and Oder. The city is an important railway junction and river port connects the industrial ports of Upper Silesia with the Baltic ports.

Bydgoszcz was annexed by Prussia in 1772, when Poland was divided.In 1807 came the town during the Grand Duchy of Warsaw , and from 1815 it came again under Prussian rule.After 1871, Bydgoszcz part of the German Empire, but came under Polish rule after the First World War. Among the city’s attractions include the tresidete, Fara Church from the 1500s in the Gothic style, which is also the oldest. The church has a famous painting. Wyspa Mynska, right in the city were former industrial center, it is now more red brick buildings and green space.