Are you excited about your upcoming trip to Katowice? If you are thinking about car hire to make your travel go smoothly, you are in good hands! There are plenty of affordable car rental services in the city, with a majority of them located in the city centre and at the nearby airport. Whether you need a place opened 24/7 or you prefer an online reservation – you’ll find something for yourself. 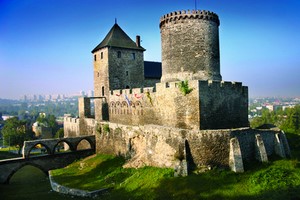 Although often overlooked, Katowice is a city that has a lot to offer and that will happily reveal its treasures to a curious traveller. It is the capital of the beautiful Silesian Region in the south of Poland, well known for its rich industrialization heritage including coal mines and steelworks. Even to this day, it’s the second most economically powerful city by GDP in Poland (after the capital, Warsaw). It’s also a great place to stay if you’re planning to visit close cities like Kraków, Częstochowa or Oświęcim (the site of Auschwitz concentration camp).

The city itself is home to around 300,000 people, however, its urban area’s population is considerable, with approximately 2 to 3 million inhabitants. Therefore, you can be certain to find a variety of places for people to entertain and relax. Just a simple stroll through the city is a unique experience as you can see the examples of almost every architectural style present. The real gem is the centre proudly referred to as a “little Paris”.

Katowice is a perfect combination of significant historic sites coexisting with a vibrant cultural scene – which tells a lot about proud but friendly residents. While Market square takes you back in time and lets you admire the oldest building in the city, other spots will make your heart beat to the rhythm. Katowice is home to many music festivals, renowned Academy of Music, Polish National Radio Symphony Orchestra and famous Spodek (Polish: saucer), a concert hall/sports venue of a shape resembling UFO.

Perhaps some of the most interesting and surprising places to visit while in Katowice are the coal mines. It may seem a little unusual at first but clearly the experience of tasting a local beer over 300 meters underground is inimitable. This is coupled with an informative and interactive tour that builds up true respect for coal miners’ work. Unlike an underground chill, the temperature on the surface is around 8 degrees in January. The average temperature during summer is 24 degrees, and can rise up to 32 degrees.

There are numerous places worth seeing in Katowice and the neighbouring cities. One that is especially admired is Nikiszowiec, a candidate to UNESCO. It’s a nearly 100-years old district easily recognized thanks to red brick buildings. It was built as a settlement for the coal miners and their families. Nowadays, tourists can still visit original workers’ houses that are the country’s official national Historic Monuments. The distance from the airport is 42.4 km (26 mi) and the journey is estimated to take 45 minutes by rental car.

Nature lovers can benefit from a charming “Valley of Three Lakes” (Dolina Trzech Stawów). It’s an ideal escape from the noise, an oasis in the middle of fast-paced city life. It’s 39.5 km (24.5 mi) away from Katowice Airport and it takes 40 minutes (or 15 minutes from the Market square) to get to this heart of nature surrounded by picturesque views. There you can relax at the beach or take advantage of volleyball courts and city bikes. If you are lucky, you can even enjoy a concert by local artists.

Last but not least, in Katowice, there is one of the most impressive museums in Poland, Silesian Museum. Visitors can learn about the fascinating facts from the history of the area. It’s worth mentioning that the permanent exhibition also discusses sensitive issues that for many years were a taboo, for example, the area’s German cultural heritage. The museum is located 38.4 km (24 mi) from the airport, which is estimated at 40 min trip by car.

There is only one airport near the city of Katowice which is located around 40 km (25 mi) north of the city centre. Katowice Airport is the fourth-biggest in Poland in terms of passenger flow. It operates a number of regular and charter flights to 105 destinations in 41 countries. It is a gateway to many holiday locations like Rhodes, Antalya or Canary Islands.

Katowice Airport, known also as Międzynarodowy Port Lotniczy Katowice is characterized by good atmospheric conditions. That means that on average there are fewer days when the flights are cancelled or delayed because of bad weather. It has three terminals where passengers can enjoy their meal or a coffee and relax before a flight.

At the airport, you can find many local and international car rental companies to choose from, for instance, Hertz, Europcar, Sixt, Jolcar, GT-CARS, budget.pl, express.pl or RentCar.pl. You can select different car models and types or even hire a driver. Any of the available options will enable you an enjoyable and convenient journey.

In Katowice, similarly to other cities, the traffic shouldn’t be a problem as long as you avoid rush hours. While driving around the city, it’s best to use online maps or rental cars’ GPS so you can move smoothly and avoid unexpected traffic or accidents. After arriving at the destination, you can use one of the many parking options available in the city. Choose from various short and long-term parking lots, guarded and not, or parking spots for which you can pay via mobile applications. Mind the fact that the strict city centre is a car-free area.

The road condition is generally good and more roads are built every year. The airport and other cities are accessible also via motorways and expressways. It’s important to remember that they have their distinctive speed limits, 140 km/h (87 mph) and 100-120 km/h (62-75 mph) respectively. On the national roads, the speed limit is 50 km/h (31 mph) in residential areas and 90 km/h (56 mph) for other areas, unless stated otherwise.