Do you want to go back in time to the beginning of Polish civilization? When you organise for car hire in Poznan, Poland, you’ll discover it all! Luckily, the city serves you with various pick-up points and diverse car rental options, therefore, simplifying your tour to both economical and at your own pace! If you have questions about finding and driving a rental car in this historical city in Poland, we have compiled this information page to provide well-researched answers. 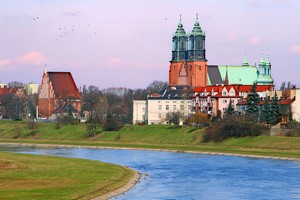 Poznan is located on the Warta River inside west-central Poland and it’s one of the oldest cities in the country. Additionally, it’s Poland’s fifth-largest city and among the country’s most famous areas with regional customs, all thanks to its cultural old town besides other intriguing sights! Also, it’s one of the most populated cities in Poland with an estimated population of about 538,000 people. drawn from the city and its surrounding towns like Janikowo, Glowna, and Bogucin.

The town spans an area of about 261.3 sq km (100.9 sq mi) with the tip of the Morasko Hill (Gora Moraska) at an altitude of 515ft (157m) being its highest point. The lowest point, however, is at the floor of the Warta Valley at an altitude of 197ft (60m). The town’s major river – the Warta river, runs through the city northbound. Other smaller rivers include; Cybina, Junikowo stream, Wierzbak, and Bogdanka. The city’s bathing, sailing, canoeing/rowing venues are Strzeszyn and Rusalka lakes, Kiekrz lake, and Lake Malta, respectively.

Poznan serves as the administrative capital for the Greater Poland Voivodeship province. Until today, it has maintained to be both a business and cultural hub for trade, technology, education, tourism, and sports purposes. As an education centre, it is a vital academic home to about 130,000 students. It’s also home to one of Poland’s largest universities – the Adam Mickiewicz University. The city houses the earliest Polish diocese and is also the host to one of the largest industrial exhibitions in Europe – the Poznan International Fair.

One of the things that make Poznan special is its classification as a Gamma-alpha city by Globalization and World Cities Research Network (GaWC). The city’s quality of learning, living standards, healthcare, and safety rank highly. Oftentimes, it has won the price for a top-notch city brand. Additionally, in 2012 the Poznan Art and Business Center was awarded to be part of the seven “Polish Wonders”. Therefore, with all the city’s achievements and serenity, it would be safe to say it’s a special tourist destination!

Poznan has various cultural sights and buildings. Luckily, the majority of these are located within the city centre and it’d take you less than 30 minutes to access them. The Royal Imperial Route is a tourist stretch, about 15.5km/9.6mi eastbound from the Poznan Lawica Airport. It contains most resourceful parts of the town showcasing its identity, history, and culture. Also, the Lake Malta (about 3km/1.9mi from the city centre) – a man-made lake, is a popular visitor’s destination for purposes of sailing. Additionally, the lake has important recreational attractions like the artificial ski slope, a zoological garden, and a narrow-gauge railway.

The Srodka Mural is public art in the midst of Srodka District within Poznan and it’s located about 14km/8.7mi from the Poznan Lawica Airport. It’s a breathtaking Trompe-l’œil attraction by Arleta Kolasinska covering the whole side of a building to appear 3-dimensional representing Sdorka in the 1920s. Another true beauty within Poznan is the Porta Posnania Interactive Heritage Center which is a multimedia museum located opposite the island’s eastern shore. It offers a detailed and captivating history about the founding of the Polish nation.

The aforementioned sights are a few of many located within the city. However, why would you spend numerous days confined within the city? Instead, you might consider driving a little beyond Poznan’s borders, about 292.1km/181.5mi, towards Northern Poland. The area has various beautiful cultural villages and towns like Szymbark, Wiezyca, Chojnice, and Gdansk.

Are you planning to visit Poznan by air? Then, you’re lucky as there are various airports within the city for civilian planes. The Poznan-Lawica Henryk Wieniawski Airport is one of the earliest airports in Poland and it’s located 5km (3mi) west of the city centre. Part of its name is derived from the neighbouring Lawica while it’s situated in the Jezyce District. Usually, it’s confused with the Poznań–Krzesiny Military Airbase.

Until 2009, the airport’s northern section was utilised for military aviation as an Imperial German Airbase while its southern section was used for civilian planes. However, there are concerns for moving the airport elsewhere because of the flight path towards the runway situated directly above the city. Poznan Lawica Henryk Wieniawski Airport caters for cargo, domestic, and international flights and can serve up to 3.5 million passengers annually.

Remarkable car hire options available within the Poznan Lawica Airport include; Alamo, Enterprise, Europcar, Green Motion, Keddy by Europcar, and Sixt. Other airports within the city include; the Aero Club of Poznan Kobylnica and the Zerniki landing-Airport Biernat. Fortunately, because all the airports are located within the city’s reach, it’ll be easier to find your hotel or desired places to stay within Poznan.

The Express Road S5 or the Expressway S5 is a limited-access road running along the route Ostroda-Grudziadz-Bydgoszcz-Poznan-Wroclaw. After Poland’s selection to host the Euro 2012 championships, the development of the road gained more superiority. However, intentions to complete the whole road ere the championships were too optimistic. Nevertheless, the entire expressway S5 between Wroclaw and Poznan is complete and open to traffic today. When driving, always be cautious of the set speed limits and stay out of trouble with authorities.

Remember to maintain a speed limit of up to 100km/h (62mi/h) on single carriageways/separated lanes, 120km/h (74mi/h) on dual carriageways, and 140km/h (86mi/h) on freeways/motorways. Paid car parking zones are open from Monday to Friday 8 am to 6 pm. The parking fees can be paid through parking meters or the MoBilet phone app and the parking ticket placed behind the car’s windscreen to avoid it being wheel-clamped. Ample parking zones include; Aleje Marcinkowskiego 52, Dominikańska 52, and Panny Marii 52.