Compare prices on car hire in Wroclaw from all the major brands and find the best deals. When you book through us, unlimited mileage and insurance are always included in the price given. 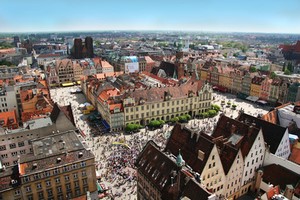 Wroclaw is Poland’s fourth largest city and capital of the province of the same name.640,000 inhabitants live in the city that lies on both sides of the river Oder. Wroclaw is located south-western part of Poland , the border of the Czech Republic .The city is an important river port and a gateway.

Wroclav has a rich culture and fascinating architecture. The city has one of Europe’s largest squares, Ryne. Around the square there are several museums, galleries, cinemas and theaters. Wroclaw has many Gothic and Baroque churches. St John’s Cathedral from 1300-century, one of Poland’s largest church instruments. In Raclawice Panorama, which is one of the most visited tourist attractions, tourists can see the battle of Raclawice painted on a large canvas. Russian and Polish troops fought against each other in battle in 1794. The Poles won the battle, while the Russians won the war. Wroclav also have several festivals including Jazz Festival at the Oder in the spring.

Wroclaw International Airport is located in Strachowice, about 12 kilometers from Wroclaw’s city center.