Compare prices on car hire in Olsztyn from all the major brands and find the best deals. When you book through us, unlimited mileage and insurance are always included in the price given. 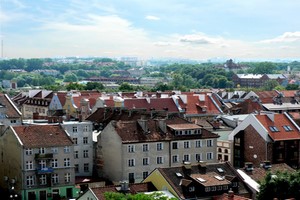 Olsztyn is situated in the former East Prussia, 170 miles north of Warsaw.173,000 inhabitants live in the city that once was called All Stein in German, in an area with several lakes, and proximity to forests and rivers.

The town grew up around a German knight castle from 1334, as a museum today. The city is rich in German and Polish culture, and is known to be a cultural and academic center. Olsztyn has its own philharmonic orchestra, cinema, theater and several cafes. Of interest to the old town, which was reconstructed after the Red Army destroyed it, is mentioned. It has, among other a portal from the 1400-century Gothic castle Warmian and the majestic Cathedral of St. James. Olsztyn central location in a lake area offers beautiful views and opportunities for activities such as swimming, kayaking, cycling and walking.

Warsaw’s Frederic Chopin Airport is 183 kilometers from the center of Olsztyn.