Compare prices on car hire in Rzeszow from all the major brands and find the best deals. When you book through us, unlimited mileage and insurance are always included in the price given. 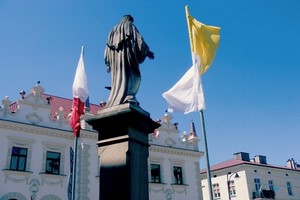 Rzeszow is a city entirely in southeast Poland , 150 kilometers east of Krakow .159,000 inhabitants (2004) living in Rzeszow at the river Wislok.

Rzeszow is located along an ancient trade route. The town was granted city status in 1354 One of the attractions is the Lubomirski Palace, residence of the noble family of Lubomirski for several centuries. Today is the court here. In the old town are two synagogues, the small from the 1700s, and the great from the 1800s that was restored after 2 World War II. From the market place you can go into a tunnel under the street level, which is from the 1700s. Tras Podziemna as it is called, is several kilometers long and connects several cellars together. The climate in Rzeszow is temperate with warm summers and cold snowy winters. The average temperature is 18-19 degrees in summer and -2 to 0 in the winter.

Rzeszow has an airport, Rzeszow-Jasionka, while the largest airport, located eight kilometers from the center.