Compare prices on car hire in Alcobaca from all the major brands and find the best deals. When you book through us, unlimited mileage and insurance are always included in the price given. 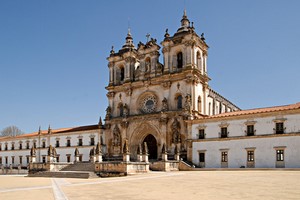 Alcobaça is located 80 kilometers north of Lisbon in the Estremadura province in Portugal .The town has 15,000 inhabitants, while the suburbs are 55,000 inhabitants. Alcobaca has emerged between the valleys of the rivers Alcoa and Baca, who also gave name to the city.

Alcobaca is known for its famous Cistercian monastery of Santa Maria, which is Portugal’s largest church. The monastery is on the UNESCO list of World Cultural and Natural Heritage. It was originally founded by Dom Afonso Henriques, Portugal’s first king, in 1152 Here is Portugal’s oldest royal tombs, including the tomb of King Peter the First and his mistress, Ines de Castro. When Napoleon’s troops invaded the country in 1810, the monastery was stripped of all its historic treasures, including its famous library. The monastery excited over a large area, and agriculture was introduced. This led to Alcobaca today is one of Portugal’s largest fruit producers. The region’s cuisine is famous for its sweets, the most famous is the Pao de lo cake.

Lisbon Aeroporto de Portela Airport is 86 kilometers from the center of Alcobaca.