Compare prices on car hire in Almancil from all the major brands and find the best deals. When you book through us, unlimited mileage and insurance are always included in the price given. 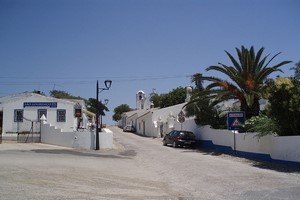 Almancil is a small village just north of Faro on the Algarve coast, far south of Portugal .Almancil is located in the province of Loulé and has 9,000 inhabitants.

Almancil is a resort with a warm climate and is known to be close to the resorts of Quinta do Lago and Vale do Lobo. Almancil is worth visiting to get the Capela de Sao Lourenco de Matos, a small chapel which is decorated with some of the best examples in the 1800s azulejos in Portugal .Around the chapel houses have retained the old charm and characteristics of the old Algarve, and there is also an art gallery. In Almancil is a good chance to buy traditional tiles. In Almancil is also Estadio Algarve, which was adopted during the football European Championships in football in 2004. Plays Louletano DC and SC his father on a daily basis.