Compare prices on car hire in Braga from all the major brands and find the best deals. When you book through us, unlimited mileage and insurance are always included in the price given. 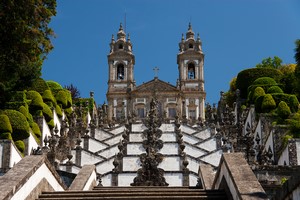 Braga is Portugal’s fifth largest city, and 45 kilometers northeast of Porto in Cavado Valley in the Minho region.Braga, surrounded by ramparts and has 175,000 inhabitants. Including the suburbs, the city has a population of 826,000.

Braga was probably founded by the Phoenicians, and is an ancient cultural and religious center. The Romans called the city Bracara Augusta, which means picturesque buildings.On a hill east of town, the church Bom Jesus do Monte, several pilgrims flock here every year. The current church was built in 1722. Up here there is a cable car. The city’s cathedral is from the 1100s. The cathedral, Igreja de Bom Jesus de Monte, several of the country’s most famous religious statues and treasures, and is one of the country’s most famous attractions. In front of the cathedral, it is no less than 1,776 steps. Photo Museum, the Museu da Imagem, with Portugal’s largest collection of photos is also here.