Compare prices on car hire in Lagos from all the major brands and find the best deals. When you book through us, unlimited mileage and insurance are always included in the price given. 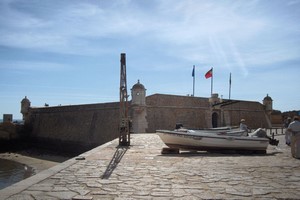 Lagos is a small town in the Algarve, at the mouth of the river Besafrim. 27,000 people live in municipalities of the Algarve. In the city itself is home to 18,000 inhabitants.

Lagos is an ancient maritime town that goes 2,000 years back in time. The city is today an important tourist town with several architectural evidence of its rich past. Lagos was the Romans Lacobriga, and the remains of a Roman city wall. One of the buildings dating back to 1445 and will be the first building that was used for the slave market. The 14 – and 1500’s was Lagos base for several voyages of discovery, and was the import port of the slave traffic. Gold Church Santo Antonio has a small regional museum. East of town is the river Meia Praia with long sandy beaches. There is also a lively nightlife.

Although Lagos has a small airport, Aeródromo Municipal Brigadeiro Costa Franco, Faro airport is 80 kilometers away is preferable.