Compare prices on car hire in Cascais from all the major brands and find the best deals. When you book through us, unlimited mileage and insurance are always included in the price given. 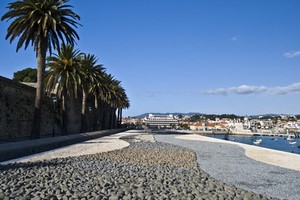 Cascais is a seaside resort on the Atlantic Ocean, specifically the Baia de Cascais. Cascais is located 28 kilometers west of Lisbon on the Portuguese Riviera.The city has a population of 30,000.

The city of Cascais belong to Lisbon and has a famous beach and casino. Casino Estoril is one of Europe’s largest. The same place is also a tennis tournament, the Estoril Open, part of the ATP tournament held every year. Cascais is renowned for a lively night life, and has several bars and restaurants. The fortress from the 1600s is the summer residence of Portugal’s president. Cascais was also resort to the country’s royal family. Guincho Beach has waves that are great for wind surfers, kite surfing and surfing. The area is also Oitavos golf course. Several caves under the ground was discovered in the 1900s in Cascais. The city was founded in 1364