Compare prices on car hire in Guarda from all the major brands and find the best deals. When you book through us, unlimited mileage and insurance are always included in the price given. 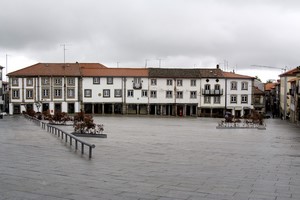 Guarda is Portugal’s highest.Guarda is located northeast of the country’s Serra da Estrela mountain range at 1,056 meters above sea level. The town has 31,000 inhabitants.

Guarda was founded in 1199 by Portugal’s by King Sancho 1, the country’s second king. That same year, the city’s cathedral, Sé da Guarda started when the city became a diocese. Most of today’s cathedral originates from 1540. Pina-chapel in Renaissance style, derived from the same period. It was originally built as a burial ground for João de Pin, treasurer of the chapel. Church altar from 1550 is shaped in stone by the sculptor Joao de Ruao. In the area around Guarda, a number of ruins and castles that were defense system in the kingdom together with the three neighboring towns of Trancoso, Almeida and Castelo Rodrigo including The mountain range of Serra da Estrela offers good skiing for tourists.

Lisbon Aeroporto da Portela is the nearest airport and is located 142 km from the city of Guarda.