Compare prices on car hire in Santarem from all the major brands and find the best deals. When you book through us, unlimited mileage and insurance are always included in the price given. 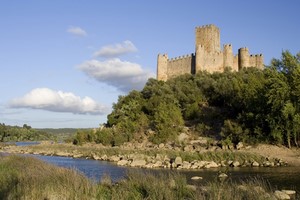 Santarem is perhaps best known as Portugal’s main bullfighting center, which reaches the greatest height during the country’s largest agricultural fair in June. Santarem is also known as Roman Scalabicastrum. It was probably the Romans who established the town of 200-300’s. The city has several historic buildings from various architectural styles. The church of Sao Joao de Alporao the facade from the 1100s is now an archaeological museum. It was built on the 12-1300s of the Templars. Castle Porta do Sol is situated on a hill by the river, and has a nice garden with spectacular views. Some of the walls remain. Santarem is a modern museum with period instruments in CABAC tower.