Compare prices on car hire in Tavira from all the major brands and find the best deals. When you book through us, unlimited mileage and insurance are always included in the price given. 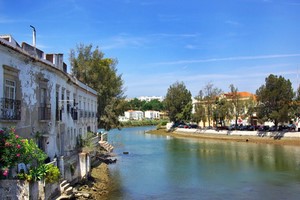 Tavira is a fishing village in the eastern part of the Algarve coast in Portugal’s southern coast, near the border with Spain, the river Gilão expiration.A bridge from Roman times the river Gilão binds the two parts together Tavira is located 30 kilometers east of Faro , and 160 kilometers west of Seville.25,000 people live in the city.

Tavira is a charming fishing village which is considered to be nearly 3000 years old. The town has several buildings and structures from various ages, and was port for such Phoenicians and Romans. The church of Santa Maria do Castelo is built where it once stood a mosque, and here lies the tomb of Dom Paio Peres Correia and his Templars. The city’s beautiful white beaches are long, and a couple of minutes away is the island of Ilha de Tavira with sand dunes. Tavira has many bars, restaurants and shops. In the Parque Natural da Ria Formosa, one can see flamingos, storks and other birds.

Faro airport is located about 30 kilometers from the center of Tavira.