Compare prices on car hire in Moscow Airport from all the major brands and find the best deals. When you book through us, unlimited mileage and insurance are always included in the price given. 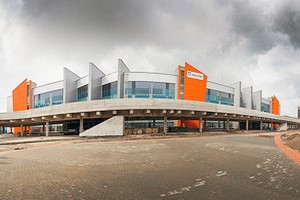 Domodedovo International Airport is located 42 km south, southeast of Moscow , and is one of three airports serving Moscow.It is the largest airport in Russia .There are good transport links between Moscow and the airport, both bus and train. There are three car rental companies at the airport, Hertz, Europcar and Sixt.

In 2009, 18,676,000 passengers visited Moscow Domodedovo Airport. It has a national and an international terminal, and in 2012, a new domestic terminal to be completed. It is the main base for S7 Airlines and Transaero Airlines. After that two Chechen suicide bombers caused 90 deaths in August 2004 when they bombed two planes are about 20 million dollars spent to tighten security.   Moscow Domodedovo Airport has a good selection of shops, cafes, restaurants and bars. It also has business center and meeting rooms, and ATM. Domodedovo Airhotel located 1 km from the airport and has just under 300 rooms.