Compare prices on car hire in Moscow from all the major brands and find the best deals. When you book through us, unlimited mileage and insurance are always included in the price given. 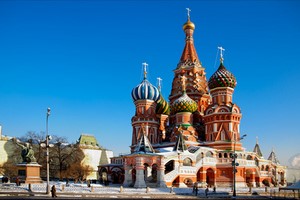 Moscow is the capital and largest city in Russia with over 10 million inhabitants (2008).This figure makes it also the largest city in Europe. Moscow is located in western Russia, between north and south. Through the city flows the River Moscow over the river Oka meets Europe’s largest river Volga in the north. Moscow’s status as the capital was given to St. Petersburg in 1712, but Moscow did it back in 1918.

Moscow is famous for many beautiful buildings, including St Basil’s Cathedral with the colors and løkkuplene as well as the seven sisters who are cathedral-shaped skyscrapers. The city is a cultural center and one of the most famous attractions is the Bolshoi Theatre. The Moscow concert halls, museums, circus and puppetry are world famous. One of the most visited sights is the fortification Kremlin and Red Square, dating from the 1400s.