Compare prices on car hire in Riyadh from all the major brands and find the best deals. When you book through us, unlimited mileage and insurance are always included in the price given. 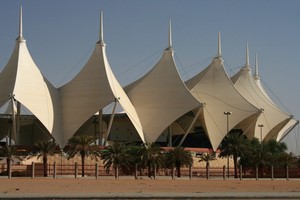 Riyadh, the capital of Saudi Arabia , is a metropolis with a population of around 4.8 million (2009).It is located on a high plateau in the middle of the Arabian peninsula – in the region of Najd. In 1960 there were 150,000 people in the city, as people rise in the last 50 years has been formidable.

The explosive expansion is evident in the urban landscape, where huge buildings marked by modern architecture dominates. Among these is Saudi Arabia’s two tallest skyscrapers: The 302 meters tall Kingdom Center (Al Mamlaka), such as contains apartments, hotels and a shopping mall with over 160 stores – and 267-meter high Al Faisaliyah Center. The former was built in 2002, the latter in 2000. An even higher building is under construction and expected to be completed during 2010.

Previously, it was 170 meters high television tower (with a view room at the top) the city’s tallest buildings. It was built in the late 1970’s.

However, there are also older architecture, primarily in the old city center. The best known is Al Masmak, which is a combination of castle and fortress, built in sandstone around 1865. There are currently part of a group of restored buildings that are collectively King Abd al-Aziz Historical Center.