Compare prices on car hire in Belgrade from all the major brands and find the best deals. When you book through us, unlimited mileage and insurance are always included in the price given. 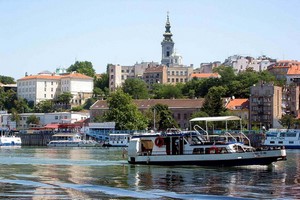 Belgrade is located in the northern part of the country and is located on the Sava River, near the spot where the Sava meets the Danube. Belgrade is the largest city in the country with a population of over 1 200 000 (2008), and this number also makes the city the third largest in Southeast Europe. Belgrade was the capital of the former Yugoslavia and Serbia and Montenegro until 2006.The country took the name of Serbia, and Belgrade remains capital.

A well-known attraction is the fortress of Kalemegdan that make up a large area on a hill in the old town. There is both parks, churches, a military museum, a museum about the forest and hunting, and a planetarium. Also the zoo Belgrade Good Hope Garden is located in this area and was opened in 1936, making it one of the oldest zoos in Europe. Other notable buildings is the Old Palace from the 1800s and the Museum of Fine Arts National Museum.