Compare prices on car hire in Kraljevo from all the major brands and find the best deals. When you book through us, unlimited mileage and insurance are always included in the price given. 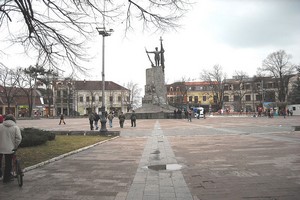 Kraljevo (which means “King City”) is located in central Serbia , near the river Ibar – and is the administrative center in the district of Raska.Both north and south of the city – which has approx. 120,000 inhabitants – is the relatively high mountains.

A little outside Kraljevo are some of the area’s most visited attractions. This includes the 800-year-old Serb Orthodox monastery Studenica (39 km south of the city).   Also nearby is the regular old monastery Zica (which also includes a partially restored Byzantine church) and the medieval fortress Maglic. Moreover, the National Museum, including interesting archaeological and ethnological collections, a well-visited attraction in the city center.

Otherwise, there is a beautiful sandy beach along the riverside at Kraljevo, where there are several charming restaurants right on the seashore.

Kraljevo-Ladevci Airport – a former military airport 15 km outside the center – has for years been under renovation and is scheduled to serve the civil aviation in 2010.