Compare prices on car hire in Grahamstown from all the major brands and find the best deals. When you book through us, unlimited mileage and insurance are always included in the price given. 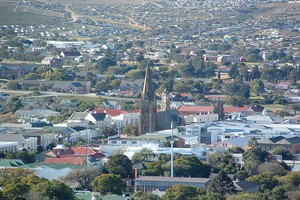 Grahamstown is located in the southeastern province of Eastern Cape, and has approximately 130,000 inhabitants. The town lies inland –   130 km northeast of Port Elizabeth, and 180 km west of East London.From Grahamstown, it is 60 km to the coast of the Indian Ocean.

Grahamstown was founded in 1812, and has several historic attractions. The most famous is “1820 Settlers National Monument” – the monument that honors the English settlers, and their contribution to the South African society. The city is also famous for its many churches, and also has its own university.

In the main street “High Street” you will find shops and supermarkets.

Other attractions in Grahamstown’s Albany Museum Complex, which consists of five museums in culture, history and science. The complex includes Natural Science Museum – where you can see a reconstruction of the first dinosaur discovered in South Africa .Other museums that are part of the complex is the Observatory Museum and History Museum.