Compare prices on car hire in Hermanus from all the major brands and find the best deals. When you book through us, unlimited mileage and insurance are always included in the price given. 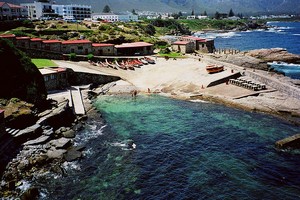 Hermanus is a picturesque village with about 50,000 residents – located on the southwest coast of South Africa in the province of Western Cape. Hermanus has a coastal line to the Great Bay Walker Bay, which is connected to the Atlantic Ocean to the west and the Indian Ocean in the south.

The city is best known for having one of the world’s best land based whale watching. The huge whales (sørkaper) come into Walker Bay during June through August, and from the high cliffs along the shore of the bay has fantastic views of the whales.

Hermanus also has a popular annual whale festival at the end of September, and a museum that is about whales and whaling.

South Africa’s national geomagnetic research facility “Hermanus Magnetic Observatory” is NOK an attraction in the city. Observatory monitors the Earth’s magnetic field, and the public can tour by appointment.

Otherwise, Hermanus modern city amenities with exclusive shops and malls, restaurants and hotels, two ports. The city’s largest sandy beach “Grotto Beach” is the most popular for tourists, but you can also find their own pristine sandy beach.