Compare prices on car hire in Ladysmith from all the major brands and find the best deals. When you book through us, unlimited mileage and insurance are always included in the price given. 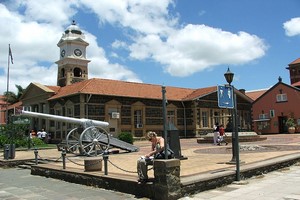 Ladysmith is located in South Africa’s eastern province KwaZulu-Natal, and has 230,000 inhabitants.The city lies inland on the river Klip River and the foothills of the Drakensberg Mountains. Ladysmith is located 230 km northwest of Durban , and 353 km southeast of Johannesburg .

Ladysmith is an important commercial center and gateway to the Drakensberg Mountains. One of the most visited tourist attractions of the city is Soofi Mosque from the end of the 1800s with his bemerkelsesverdighe architecture.

Another point of Ladysmith’s Siege Museum – originally built as a town hall in 1884, but was destroyed during the Anglo-Boer War (1899-1902).The war, which is also called “the second liberation war” played out between Britain and   Boer republics of Transvaal and Orange Free State.The museum displays artifacts, documents, uniforms and weapons from that war. In the city are also several monuments and memorials from the Anglo-Boer War.

An hour’s drive from Ladysmith is the Royal Natal National Park, which has some of the most spectacular scenery in Africa. There is also the world’s second highest waterfall, Tugela Falls – a major tourist attraction.