Compare prices on car hire in Port Elizabeth from all the major brands and find the best deals. When you book through us, unlimited mileage and insurance are always included in the price given. 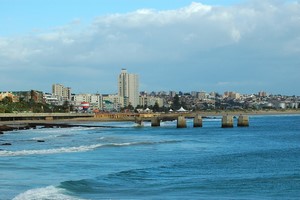 Port Elizabeth was founded in 1820, and is an important port city. The city itself has 750,000 inhabitants (2008), but it is estimated metropolitan municipality Nelson Mandela Bay Metropolitan (such as Port Elizabeth is part of) the population is increasing to 1.3 million people.

Port Elizabeth is located along the main road N2, which runs along the coast from Cape Town to Durban – the Indian Ocean.

The city has a warm climate with 20 degrees Celsius almost all year, as well as beautiful, long sandy beaches – something that attracts tourists.There are also opportunities for various water sports on the coast of Port Elizabeth.

The city’s most famous landmark is the Donkin Reserve, a park located on a hill behind the town center where such find a lighthouse from 1861 and a small stone pyramid.

Other attractions and sights in Port Elizabeth are: Settlers Memorial Campanile – a 53.5 meter high bell tower, the City Hall from 1885, the Oceanarium and Museum – with reptilhus and scientific exhibitions and The Boardwalk Casino & Entertainment World – a large outdoor area with restaurants, cinemas, shops and casino.

Airport Port Elizabeth Airport is 11 km south of the city, and has mostly domestic flights to Johannesburg and Cape Town.