Compare prices on car hire in Richards Bay from all the major brands and find the best deals. When you book through us, unlimited mileage and insurance are always included in the price given. 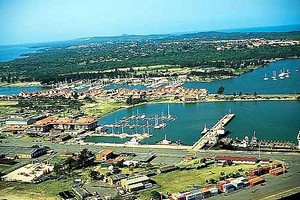 Richards Bay is a small coastal town with 54,600 inhabitants (2009), and is located in the eastern part of South Africa. The city belongs to the province of KwaZulu-Natal, and is beautifully situated at the mouth of the river Mhlatuze, which flows into the Indian Ocean. The port, which consists of a 30 kvm2 lagoon, is one of the nation’s largest.

Richard Bay surround the harbor and the status of being one of the cleanest and most ecological towns in South Africa. The village has more shops and malls, cinemas, restaurants and bars.

Richard Bay has a subtropical climate with hot, wet summers and mild winters. The city’s main source of income is tourism, and the long beautiful sandy beaches attract many tourists here. The beach Alkant Beach is the most popular, where there is good surfing opportunities. It is safe to swim here – when it is set up haigarn in the sea. Dolphins often come close to the beach, and the place has a special lookout for the observation of dolphins.

In the port “Tuzi Gazi” is the most luxurious yachts, and this port is a meeting place for sailors from all over the world.

Taking the trip to the lake “Lake Mzingazi”, we find sub-tropical vegetation and abundant wildlife – with crocodiles, hippos, flamingos and hundreds of different bird species. The lake is located 8 km north of Richard Bay.

The closest airport is Richards Bay Airport, located 12.7 km north of downtown. The airport is mostly domestic flights to Johannesburg .